The next iteration of WLAN protocols is due to release next year. Here's a look at IEEE 802.11ax-2019 and why it's needed.

The latest WLAN IEEE standard is referred to with several epithets: High-Efficiency Wireless (HEW), Next Generation Wireless, the "New WiFi" standard, etc. All of these names convey the expectation of something different. 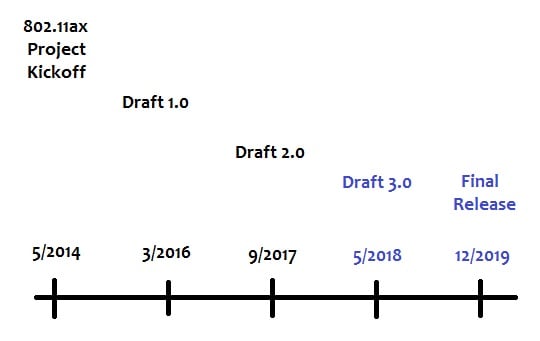 Figure 1. The current timeline for the development and release of 802.11ax

The Need for HEW

The IEEE 802.11 standard covers Wireless Local Area Networks (WLANs) operating in the unlicensed 2-6 GHz spectrum. The current published standards, 802.11n (802.11n-2009) and 802.11ac are for the following spectrums and have the following speeds associated with them.

While each brought new methods, techniques, and technology to carry more data over the airwaves, as soon as 802.11ac was published, the IEEE knew there was still work to be done.

As good as the existing standards are for traditional single-user environments, when a large number of users were located in specific areas (like an airport or stadium), less than desirable things were happening to the Wi-Fi signals for that area.

The large number of Access Points (APs) required for coverage and the dense concentration of devices/stations caused contention and interference; networks serving the environment degraded and slowed for everyone. The medium access layer (MAC) of these standards rely on a Carrier Sense Multiple Access with Collision Avoidance (CSMA/CA) scheme to control access to the airwaves.

With this 'collision detected/back off/try again' scheme, handling a lot of devices invites problems; the more devices trying to connect, the more collisions, the more degradation users experience. (Think of a planeload of passengers arriving at a terminal with all their devices searching for connections at once...) New MAC techniques will minimize collisions.

In addition to handling dense concentrations of users, improved Wi-Fi is needed for the growing number of devices associated with smart homes, wireless offices, and gaming. Even households can see their current routers max out when two or three streaming applications are in use. Improvements in the physical layer (PHY) will increase throughput for multiple users.

With these use cases in mind, the IEEE set out to design a standard that focused on how users experienced their Wi-Fi and overall network capacity. In May 2013, they asked their members if there was support for “high-efficiency WLAN”. The intent was to "enhance 802.11 PHY and MAC in 2.4 and 5GHz."

The solicitation for support highlighted "spectrum efficiency and area throughput" as goals for the new standard, as well as "real world performance". These goals reflect the changing needs for Wi-Fi: more load, more efficiency, and more reliability, even in the face of increasing interference and various deployment environments.

The HEW 802.11ax standard will replace both 802.11n and 802.11ac, becoming a high-efficiency WLAN standard for both 2.4G and 5G networks and focusing on multi-user environments. The standard is also expected to be backward compatible with previous standards.

In addition to incorporating techniques found in other Wi-Fi and cellular technologies, it has the advantage of having both the 2.4G and 5G networks available, which could be used in combination to provide even more capacity.

The requirements include direction for "at least one mode of operation capable of achieving at least four times improvement in the average throughput per station in a dense deployment scenario, while maintaining or improving the power efficiency per station." It is reported to offer up to 10 Gigabit speeds.

In addition to handling MAC contention, the new standard includes:

The multiplexing signal format used in 802.11ax is OFDMA, Orthogonal Frequency-Division Multiple Access. This builds on the Orthogonal Frequency Division Multiplexing (OFDM) format used in previous standards. OFDM uses multiple carriers, spreading the data to be modulated over the several of them. The receiver demodulates the various carriers to recover the signal and is less prone to interference. OFDMA subdivides the carriers further, assigning subcarriers to individual users and allowing transmissions from several users as the same time.

Improved QAM boosts carrier efficiency. QAM is a digital modulation technique that incorporates both amplitude and phase modulation. In a very simple system, if you have 2 signals, shift one by 90 degrees to the other, you could transmit them both on the same carrier without interference and recover them at the receiver. 802.11ac uses 256-QAM modulation; 802.11n uses 64-QAM modulation and 802.11ax uses 1024-QAM modulation. By modulating 1024 different signals over the same frequency four times the efficiency of 802.11ac is realized.

APs can control and balance connections across the network using load balancing and dynamic sensitivity. Instead of one AP attempting to respond to every connection request, these techniques direct APs to not to respond if another AP in the network can provide a better connection or if making a connection would exceed the expected load requirements.

To actually experience the speed and features of 802.11ax, the entire network has to implement the standard: APs, routers, and individual devices. Early release chipsets have been announced, as well as some equipment.

The Wi-Fi Alliance is expected to start certification in early 2019 but everyone is already looking forward to HEW Wi-Fi now.

Anyone can claim they do wireless site surveys, including those that walk around using free utilities that check for basic signal strength, without any training or understanding of how wireless works. That may be fine if you only need basic Internet connectivity, but if your network supports mission-critical applications, you need a professional-grade solution.

Our methodologies are what differentiate us from our competition. We start with the belief that combining the best tools and training with years of experience leads to the best wireless solutions available. Our formula for success includes the following:

We start with a commitment to having the best trained personnel possible. We only employ or contract with Certified Wireless Network Professionals (CWNP).

We are proud to be a member of the prestigious CWNE roundtable, an exclusive committee of wireless experts dedicated to developing the highest level and most respect vendor-neutral certification in the wireless industry, as well as writing technical whitepapers.

Predictive models, also known as virtual site surveys allow us to efficiently and accurately identify the number of access points required, as well as their initial placement and configuration. Modeling is ideal for creating "what if" scenarios that show us the effects of changes in real time. Our designs always start with a model which we then validate.

Because wireless networks operate in unlicensed frequencies, potential interference from numerous devices such as microwaves, cordless phones, Bluetooth devices, video cameras, etc. can have a significant negative impact. RF spectrum analyzers are the only devices that can identify physical-layer interference, and no onsite wireless site survey is complete without this service.

When the highest degree of accuracy is required for your mission-critical applications, there is no substitute for a professional-grade manual site survey.

Our surveys start with temporarily mounting the same access points and antennas that will be permanently installed. We then use professional-grade software to test not only for signal strength, but Signal-to-Noise ratio (SNR) to test the signal's viability, interference and data rates. Our thorough approach is the most accurate solution available.

Our reports spell out the facts, and leave no doubt in the customer's mind as to what the wireless network does or will look like.